Dr. Francisco Contreras: The power of life and death is in the tongue. If you pronounce somebody dead, they see the doctor as an authority and so they buy it. “I’m dead. No matter what.”

The truth is that not only doctors are not Gods, we don’t know. But nobody in this room knows if we’re going to be alive tomorrow. By the same token, you can never say that a cancer patient is going to die. We’ve had patients that were told that they were going to die in three months and then 20 years later…

The first thing that I impress on a patient is that victory over cancer is a decision, not a happening. You don’t have to be victorious for the tumor to go away. There arepatients that have surgery and chemo and then the tumor goes away and they can’t sleep. Why? Because they don’t know when it’s coming back. So they’re tumor free, but not free of cancer.

Ty Bollinger: I know many people that fit that description.

Dr. Francisco Contreras: It is very important if you have victory over cancer in your mind… everything follows. If you decide that you’re going to die, it’s very difficult to bring you back. 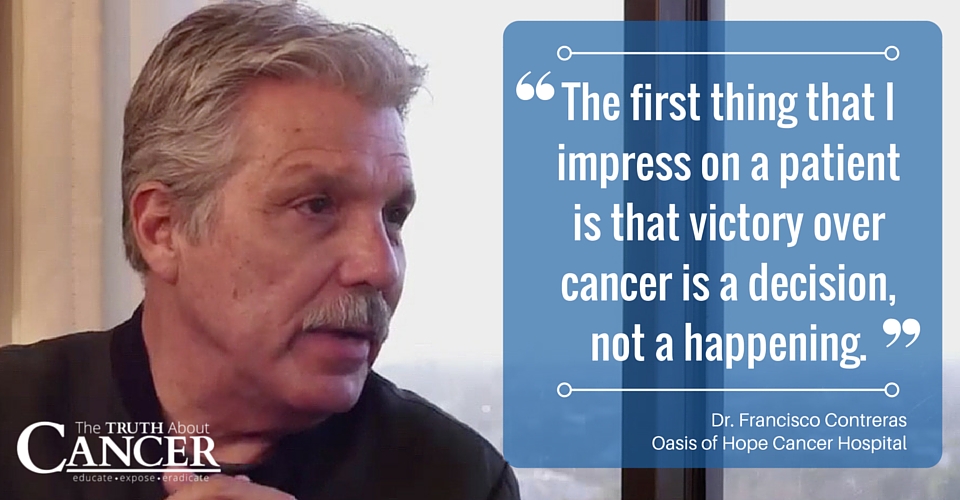 Victor Frankel could determine who was going to die within 24 hours in the concentration camp. It was when they smoked their cigarettes. You say, “Well, cigarettes cannot cause cancer in 24 hours.” No. Cigarettes were their hope and they traded everything with cigarettes. So when they had no more hope they started smoking their cigarettes. Like you burning your money.

Ty Bollinger: And they had given up.

Dr. Francisco Contreras: And they would die within 24 hours. The power of hope is incredible. That’s why we’re the Oasis of Hope. We’ve been criticized enormously for selling false hope. My question is… Well, if false hope is telling, “You are going to live,” what is true hope… You’re dead?