If you have ever walked through a mountain forest on a warm sunny day where there was an abundance of pine, spruce, and fir trees, you might agree that it is a divine experience. With the crowns of the trees swaying gently high above, there is a sense of peace and serenity, calm and tranquility. Breathing in the resinous aroma from the warm needles in the boughs above, together with the scent released by the needles that have fallen to the soft forest floor, is a heady experience.

The oils released from tree needles is invigorating for both body and soul. It seems to elevate the mind and spirit and helps to relieve our inner torments.

Can a Walk in the Woods Kill Cancer Cells?

Indeed, Japanese researchers have discovered that a simple walk in a city park or forest boosts natural killer (NK) cell activity. And they found that the good effects from this single walk lasts up to 30 days! NK cells are the cells of the immune system actively involved in killing tumor cells. The Japanese researchers from this study conducted several other studies from 2004 to 2011. They found that something called phytoncides are released from trees. When we breathe this in, we enjoy a reduction of stress hormones, which may partially account for the increased NK cell activity.

We are learning that coniferous trees have even more to offer us. Did you know that one of the most popular chemotherapy drugs in the world − paclitaxel − is derived from extracts of the bark on the Pacific yew tree (Taxus brevifolia)? Scientists in the 1960s and 70s studied these tree extracts and found they had potent anti-cancer activity. As natural substances cannot be patented, scientists found a way to make a chemical equivalent to create a patentable drug known as Taxol.

The original phytochemicals derived from the needles, cones, wood, and bark of coniferous trees have much to offer, especially to cancer patients. This is a fascinating new area of discovery for essential oil enthusiasts, scientists, and anyone who takes an interest in health matters.

Historical Use of Coniferous Tree Oils

The use of oils derived from various parts of coniferous trees for healing goes back to the time of Hippocrates (460-370 BC). Hippocrates noted the ability of these oils to assist diseases of the lungs and respiratory system. Pine trees were sacred to the ancient Romans, who used the pine tree oils in bathing rituals and religious ceremonies.

The indigenous people of the Americas used pine needles in their bedding to repel insects. They also made a tea from the needles to relieve sore throats, congested heads, fevers, colds, and lung infections. Many tribes still burn pine, juniper, and cedar in purifying rituals.

What makes the oils extracted from coniferous trees so powerful is their phytochemical (natural plant chemical) makeup. These phytochemicals play an important role in health and healing. Some are anti-inflammatory, some are anti-bacterial, and some even have anti-cancer activity. Indeed certain phytochemicals are the focus of worldwide research for their chemopreventive (cancer preventive) role and ability to kill cancer cells.

There are hundreds of different species of coniferous trees from which we can obtain essential oils. It would be a huge task to list all of them, so in the interest of brevity let’s discuss the essential oils currently readily available to us. They are listed below, along with their phytochemical profile. (Please note only the phytochemicals found in majority are listed for each oil. Each oil also contains many others in much smaller quantity.)

Alpha- & Beta-Pinene – A 2012 Japanese study demonstrated that a fragrant environment rich in alpha-pinene reduced melanoma growth in mice by about 40%. An in vitro (test tube) study in 2012 performed in India found that both alpha- and beta-pinene exhibited significant antioxidant and anti-proliferative activity (proliferation describes the ability of cancer cells to rapidly spread). Specifically, the effects were studied for human monocyte, lung carcinoma, liver adenocarcinoma, prostate, and ovarian cancers.

Two Chinese studies found alpha-pinene to have an inhibitory effect on liver cancer cells. Furthermore, Chinese researchers reported in 2015 that combining alpha-pinene and beta-pinene with the chemo drug paclitaxel had a “substantial” synergistic effect on non-small-cell-lung cancer cells. Canadian researchers reported in 2015 that alpha-pinene, beta-pinene, limonene, and bornyl acetate all had antibacterial and antioxidant properties.

Abieslactone – A Chinese study in 2014 on a phytochemical known as abieslactone from certain varieties of Abies trees (Idaho Balsam Fir and White Fir) found that it inhibited the growth and proliferation of three different liver cancer cell lines. While the abieslactone content of the two oils has not been quantified, the research is certainly noteworthy.

Camphene – Camphene is a much-studied phytochemical, although few studies have been done on camphene derived from coniferous trees. The author believes it does have therapeutic value, however, regardless of which plant camphene comes from.

One Brazilian study reported in 2015 indicated that camphene (derived from Piperaceae) induced apoptosis (programmed cell death, a feature missing in cancer cells) in melanoma cells. Additionally, camphene exhibited anti-tumor activity in vivo (meaning in the body, so the study was done with actual humans), and was found to be beneficial against highly aggressive melanoma cells. Camphene also has pain relieving and anti-inflammatory benefits.

Limonene – There are dozens of studies on limonene, but the two most exciting studies relate to how it benefits breast cancer patients. A small U.S. study released in 2013 on 43 women with newly-diagnosed breast cancer indicated that limonene reduced cyclin D1 expression in tumors. Cyclin D1 is a protein involved in the life cycle of cells, which when reduced also appears to reduce tumor cell growth.

Another small U.S. study reported in 2014 on 40 women with early-stage breast cancer indicated limonene reduced the circulation of adrenal steroid hormones. Because estrogen is a steroid hormone and thought to have a proliferative effect on breast cancer tumors, limonene may be able to play a role in reducing estrogen levels. For more on citrus oils which contain plenty of limonene, please read 6 Ways to Use Citrus Essential Oil for Cancer Prevention. See also research mentioned below on pine essential oil.

Terpinolene – Another much-studied phytochemical, terpinolene is one of the major constituents of a plant known as Protium heptaphyllum. 2013 Turkish research  found terpinolene to be a potent antiproliferative in rats with brain tumors.

In 2016 Brazilian scientists conducted research with interesting results. In an animal breast cancer study, terpinolene (along with several other phytochemicals) protected cells from damage by cyclophosphamide, an often-prescribed breast cancer chemotherapy drug. It also appeared to prevent DNA damage to cells.

Interestingly, researchers stated that the effect of pine oil on the estrogen receptor negative cells (ER- and TNBC) was almost three-fold stronger than on the ER+ cells. Additionally, it was noted that pine essential oil worked as well or better than a tamoxifen and ellipticine (both anti-cancer drugs) combo. The researchers found pine oil to have considerable cytotoxic activity in other cancer cell lines as well, including leukemia, colon, lung and liver cancer.

Balsam fir oil was the subject of a 2003 French study which discovered that it had anti-tumor activity in several cancer cell lines, including breast cancer (metastatic ER+ PR+), prostate, lung, malignant melanoma, and colon cancers.

3 Ways To Use Coniferous Essential Oils

1. Inhale – Place 1-2 drops of oil into your hands, place them over your nose and mouth (make sure to avoid eyes), and breathe the oil in deeply for several minutes. Inhalation is considered to be one of the quickest methods for getting essential oils into the body and bloodstream.

2. Diffuse – Using an ultrasonic cool mist diffuser (never heat the oils as it can interfere with their therapeutic properties), diffuse the oils into a room where you will be sitting for an hour or so.

3. Apply – For external use, dilute coniferous oils using a good quality carrier oil such as organic almond, coconut, or hemp. Gently massage oils into the sides of the neck, overlying the carotid arteries. You can also massage them into the back of the neck just under the bottom of the skull in the hairline, into the breast, or abdomen. 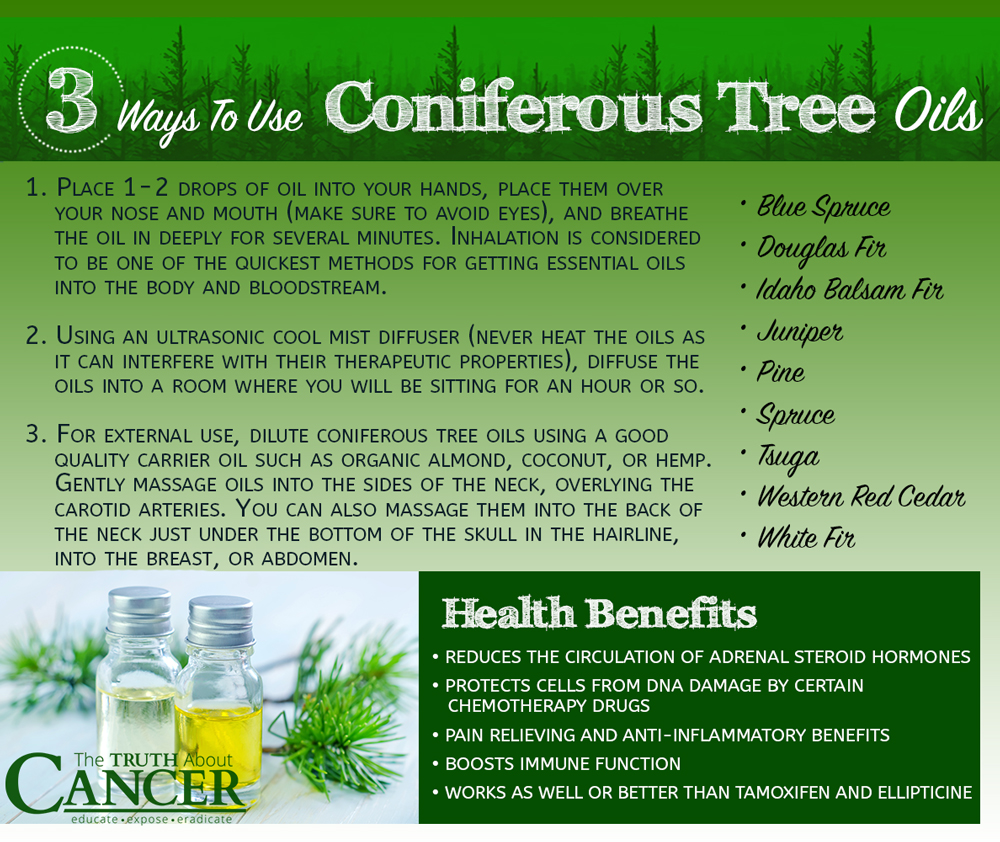 If you wish to use essential oils medicinally, do your homework. Be aware that quality of essential oils varies quite a lot from brand to brand. It pays to do some homework before purchasing. Discover whether or not the maker of your preferred brand of essential oils uses organic growing methods, and knows how to properly distill the oils without toxic chemicals. Always buy essential oils from a trusted source.

Avoid application of essential oils near eyes, ears, or sensitive regions of the body.

In cases of sensitive skin, always dilute essential oils. If unsure, do a patch test first on a small area of skin just inside the elbow. If a reaction occurs, you may wish to discontinue use and consult a qualified aromatherapist. To dilute essential oils use an organic carrier oil like jojoba, almond, coconut, hemp, or argan.

It is not recommended to use any essential oil as the sole treatment for cancer, or for any other health issues mentioned here. However, when used with other treatments (conventional and alternative both), the healing properties of essential oils can be very helpful.